“Reality is an illusion created by a lack of alcohol.” ~ N.F. Simpson 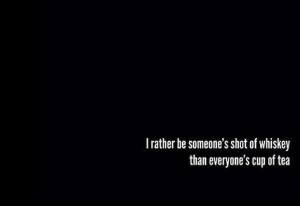 It’s a broad lick Nic,
And I’ll tell you while I’m able or I’ll smash your skull,
If your not drinking enough Black Label.
It’s a hard man’s drink and though the bottle’s broken,
Put your money on the table,
Strain the glass through your teeth.
We grew up lean, mean, Kings of the Street Scene.
Without a mother’s guiding hand to keep us clean.
Down your rum, we’ll take life as it comes,
And all you blue rinse critics lickk our literary bums.

I drank my first pure malt before I was three,
Smoked a pack of Dutch cigarettes my pappy left for me.
And I romanced a little lass who was twelve years my elder at the age of six I held her.
That year I also bed her so before I was seven my first child was born.
I told a pack of filthy lies as a politician,
Heard my own confession as act of contrition.
I spent ten years as a Trappist monk in a village in Tibet,
And I walked up Everest naked just to win a bet.

Well I cut off my leg to win a one legged race,
And when I won I stitched right back into place.
I fought Mohammed Ali, I’ve seduced Mata Hari.
I’ve even worn a sari when I impersonated Gandhi.
And I dare any man here to call me a liar…… LIARS!!!
But I swear I’ve seen Ezikiel, I swear I’ve seen Isiah,
Toasting marshmallows in Beelzebub’s fire.

And we’re mad, MAD! Bad, BAD! Dangerous to know.
We never gave a tinkers cuss about the seeds we’d sow.
And we stay up late and never be forlorn.
And when the morning comes around we’ll kiss the crack of dawn.

We took the whacks from Kerouac’s and dusty Dostoyevsky’s,
And when all was said and done booze was all I had left me.
For all the world’s great thinkers are all a load of pus!
And if you asked us how Zarathustra spoke,
He spoke thus: Drink! Drink! Drink!
Drink until your drunk,
Drink until you can’t stand up,
Til you’re roly poly stunk.
Til your bladder bursts til you throw a fit and curse,
Til they lift you up still comatose and slamdance in the hearse.

How can you not love a little DAAS on a Sunday?

Click the picture, and rub a little funk into your day.

Indie writing at its most dubious.
View all posts by Hamish Ross »
« Yarr! And other pirate phrases. Our tailored children’s books at $50 per book ends on the 31st of July.
Getting my Sunday ‘Poe’ on……………. »

Indie writing at its most dubious.